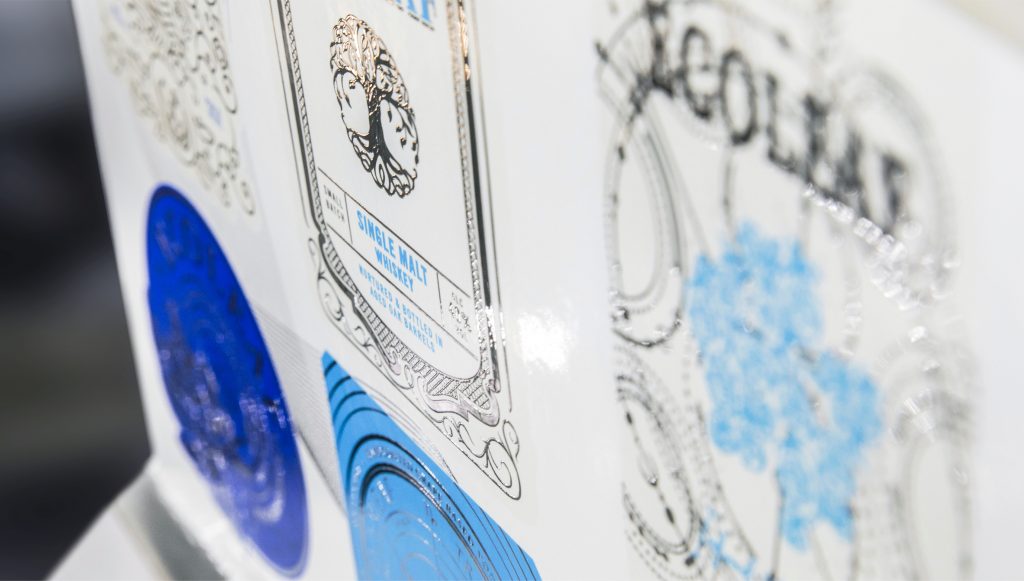 Kolbe-Coloco Spezialdruck GmbH, a German printer based in Versmold, has installed the first of a new metallization technology called ECOLEAF, for use on a narrow web label press. This sample shows ACTEGA’s Metal Print ECOLEAF metallization.

ECOLEAF was originally developed by Landa and first shown as Nano Metallography at Drupa 2016. Landa sold the technology to ALTANA’s ACTEGA Coatings & Sealants division in 2017. ALTANA used it as the basis of a new company, ACTEGA Metal Print, and has further developed the technology.

Conventional metal foiling leads to a great deal of waste as it involves cutting an image out of a sheet of foil and throwing away the unused part of the sheet. But ECOLEAF works by applying a thin layer of silver metallic flakes or pigments to a donor roller that is then applied to the image to create the decorative effect.

There’s virtually no waste because the ECOLEAF unit only dispenses the amount of metallic flakes that are needed for each image. It can be used with most existing print technologies from labelling to wide web flexo presses. ACTEGA says that when combined with screen printing it can create tactile metallic effects, even when used on filmic substrates, so that there’s no further need for embossing. It can produce high resolution images with flexo, or variable data work with inkjet. It can be used with most substrates, including standard label stock and absorbent rough paper, and ACTEGA says that it’s suitable for metalized microwaveable packaging.

Michael Leon, managing director of Kolbe-Coloco, says that ECOLEAF’s sustainability was an important advantage, explaining: “Our business is focused on print services that create a greater connection between a brand and the consumer, to ultimately aid sales. We do that by employing some of the best print technologies on the market, and ECOLEAF is a perfect example of this.”

He continued: “Eradicating foil is a huge and incredibly important milestone in our industry, and this technology looks poised to support that. For this reason, we have no doubt that our customers will embrace ECOLEAF with open arms, but we also know that they will love the opportunity to add cost effective and amazing metallization to their jobs too – this solution has the potential to be a serious game changer.”

The ECOLEAF unit was installed for beta testing in early March 2020 on a Gallus RCS 12-colour flexo press. The servo-driven press is configured with a mixture of offset, flexo and screen units.
Kolbe-Coloco, which originally started as a bookbinding company in 1828, is part of the larger H.O. Persiehl group that’s based in Hamburg, Germany. The company moved into sheet fed offset printing from 1960 and has pioneered the use of UV technology since 1975. The company produces label rolls, sales folders, brochures, special effects cards or unusual 3D advertising material for the point of sale in the sheet fed and label roll printing sectors. It exports to The Netherlands, France and Switzerland, mainly in the spices, smoothies and meat markets.
Jan Franz Allerkamp, managing director of ACTEGA Metal Print, commented: “In Kolbe-Coloco we’ve found a likeminded and very innovation-driven business. One that operates an automated, clean and very professional environment, but a company that has already proved itself to be a real change-maker. We look forward to working closely with them over the coming weeks and months, and to seeing ECOLEAF’s positive impact on their business.”

ECOLEAF will be commercially available from Summer 2020 onwards. You can find further details on ECOLEAF from actega.com and on Kolbe-Coloco here. https://www.kolbe-coloco.com/news/